Alexandria is a tier 3 city in the South Eastern hemisphere, created and still operated by Admin ~Ender. The City is a founding member of the Southern Union for Development.

The city differentiates itself from other cities by being far away in the east of the map rather than close to other cities and by having an Hellenistic / Ancient Roman/Greco theme rather than most cities which tend to be modern.

The city also hosts the infamous Alexandria Jackals which won the 2021 HM Olympics in Ironball.

How to get there:

The start of a city in a desert far away.

Alexandria was created by Admin ~Ender in September 2020. For a long time the city didn’t sell plots as Endershack tried to work more on the city before selling plots.

In June 2021 Alexandria acquired the overseas territory of Corinth with the intention of incorporating the city into the empire once Alexandria reaches tier 6.

On 12 September 2021 Alexandria finally opened its doors and started selling plots in their market district along with townhouses.

Alexandria lies in the South eastern hemisphere of the map and is officially the most eastern city on the server (until Cardiff gets approved).

The city is a tier 3 city with over 1.4 million forsals in land spread over a peninusla and a couple of islands in the desert. 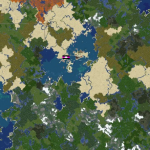 The cities ‘close’ to Alexandria are Bayview and the unapproved cities of Valnir and Cardiff.

Alexandria has a physical railway connection to Bayview dubbed the Great Eastern Railway which in the future is meant to connect to the cities of Archendale and Trakai.

The city of Alexandria is a theocratic absolute monarchy lead by Admin Ender who goes by the title of Faraoh of Alexandria.

The city of Alexandria is a founding member of the Southern Union for Development which deals with international affairs regarding infrastructure and the economy but mostly infrastructure.

The city of Alexandria explicitly stated to be neutral in the ongoing worldwide conflict between the Hellominers Soviet Union (H.M.S.U) and the Worldwide Agreement on Server Protection (W.A.S.P)

The following cities/countries are on friendly terms with Alexandria and its leaders bear the title of Lēgātī, more about this title can be read in the Culture section.

1. Do not kill aquatic creatures
– If any one kills a squid, dolphin, turtle, or tropical fish, they shall be put to death by the Pharaoh in the same waters where the creature perished.

3. Do not steal animals
– If any one steal cattle or sheep, or an ass, or a pig or a goat, if it belong to a god or to the monarchy, the thief shall pay thirtyfold therefor; if they belonged to a freed man of the king he shall pay tenfold; if the thief has nothing with which to pay they shall be put to death by the Pharaoh’s hammer.

Despite its financial district not being adjacent to it’s airport, which is usually where cities put their financial district, The city of Alexandria is relatively popular and has attracted investments from foreign companies like retailers Blockazon and Teslo. The city has a taxi connection going straight to the financial district.

The city doesn’t have large plots nor does it allow for highrise which makes it a city not fit for megastores. Regardless, Alexandrian citizens can get their daily needs and a limited selection of building materials in the city. If you are planning on starting a company in Alexandria consider starting a business that tailors to Alexandria’s needs.

Alexandria does not have newbie apartments or the possibility for them, nor does it have any job facilities. Meaning any economic movement within the city comes purely from real estate and small retail.

Alexandria has a unique culture of its own by being a themed city rather than a modern city.

The Social classes of Alexandria.

🟣 Pharaō  – The archon and divine ruler of Alexandria, addressed by Your/His Majesty

– Earned only through selection for succession.

– Earned through appointment by the Pharaoh

– Earned through owning a home and business (🟤 + 🟢) or by royal assignment.

– Earned through a display of skill and expertise greater than those athletes currently on the roster.

– Earned through owning a home

– Earned through owning a business, such as an apartment building or shop

🔵 Lēgātī – Foreign leaders of a government recognized by Alexandria

Alexandria’s own ironball team while being quite recently formed exists of star players that are known to have won former championships before, as ~Ender himself used to play for past champion the Sunset Coast Camels it is no surprise that the Alexandria Jackals won the 2021 HM Olympics in ironball.

Store by Thendil, can also be found in places like West City, sells daily essentials and building materials.

A convenience store of Valnirian Supermarket chain Teslo, can be found in over 16 other cities. Sells alcohol, food and other slimefun items.

As stated in the economy section, Alexandria doesn’t really have jobs apart from government positions.

There are still plenty of plots for sale in Alexandria. Marketplace plots go for 20F a block and townhouses for 40F a block.