If you have been anywhere on the server lately you’ve probably been killed a dozen times by one of the new mobs. Love ’em or hate ’em but they’re here to stay for a little longer.

A few days ago, MOD Dr_StevenStrange introduced us to his new creations, the Halloween Mobs. 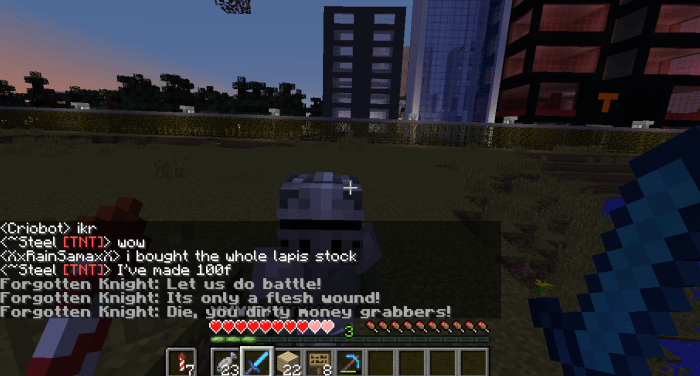 A forgotten knight in front of my new Teslo Plaza where you should totally get an apartment.

Although I love the idea of having Halloween mobs, these mobs in particular are quite annoying  since they’re way too strong. Another annoying thing about Steven’s new creations is that they spawn in player cities which shouldn’t be happening. So it’s no big surprise that people are hating on the Halloween mobs. Especially since most people don’t wear armour because they’re not used to being attacked by overpowered mobs in cities.

However there has also been positive feedback on the new mobs. When you have the right equipment, killing these new mobs can be fun and make you easy money. Invest in some good enchanted armour and some good weapons (especially bows) and you’ll be ready to hunt.

It’s also funny how the Forgotten Knight refers to a classic documentary about life in modern day Britain (Monthy Python and the Holy Grail). Whenever you encounter a forgotten knight it will spam you with “It’s only a flesh wound”

Besides the fact that we got Halloween Mobs I just really appreciate the effort that Steven takes to make players suffer. Plus, you should be thankful that only one mob type explodes and not all of them.

If you really hate the new mobs than there is good news for you, the mobs will be replaced by new mobs considering Halloween is over. Hopefully these mobs will have better settings so we don’t have to die constantly.